Next Step ~ Be Prepared 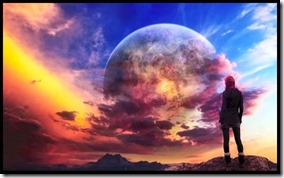 It is now a peculiar ‘time’ for those who ‘see’ and ‘know’ that which many others are unable to see/know/accept/understand/witness with closed eyes and manipulated minds.

It is also a ‘time’ for patience and perseverance while much goes on behind-the-scenes in terms of moving to the next-step of disclosure and opening of minds to the bits of truth that can be digested/handled by the uninitiated.

For those who are as yet unable to ‘see the Light’ – just ‘hold on’ and be prepared for that which will ‘soon’ become inescapable to turn a blind-eye on. And though I use the word ‘soon’ please understand that no one is able to predict exact dates for events, as much depends on the collective consciousness which is constantly changing. So when you read exact dates for events/predictions keep in mind that your consciousness as part of the collective will have an effect on when and how things happen – the given dates are only based on a current set of possibilities/probabilities. However, it is certain that the Light has Won and is ‘soon’ to be played out on the physical plane when all is in place and the collective consciousness is ready…

Following are two quotes with links to full content.  And as always use your inner-wisdom and discernment to take that which feels right to accept, discard, or save for later.

First,
“Dearest Souls … within all that is occurring during this CHANGE OVER on your Planet … it would be very difficult to avoid certain matters. This change over from dark to Light ruling your Planet is far, far, far more complex than the ‘human’ brain can actually grasp … with the greatest of respect.”  …continue to full content here

Then this,
The phrase “Conspiracy Theory” was created by the Hidden Enemy working within the US government (CIA), for the purpose of deflecting truth seekers who were becoming aware of the Truth behind the Kennedy assassination.   And the phrase has conveniently been successfully used since then to control those who dare to think critically and exercise their sovereignty as Beings of Divine Source.

Leave the chaos of the world behind and prepare for the Golden Age of Gaia. Join me on this journey and maybe you will find something to inspire you on your own Inner Path to Wisdom.
View all posts by Mashanya Allah-Ma ~ Inner Path Wisdom →
This entry was posted in angels, Disclosure, Gaia, goddess, nature, New Earth, Pagan, Planet Earth, poetry, spiritual, starseeds, the Golden Age, women, Writings, yoga and tagged Age of Aquarius, Awakening, conspiracy, Conspiracy Theory, NESARA, New Earth, Pagan, Republic, Yuga. Bookmark the permalink.
%d bloggers like this: