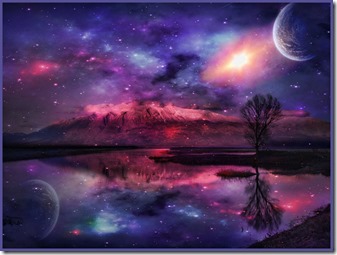 While in meditation I was told a very large Galactic Federation ship will be here in the first week of March. It has 49 shuttles each 220 feet wide. It is part of the changes rapidly unfolding on Earth. Most of your leaders are aware of and working with the Federation, the Orion Council of Light and Pleiadians. I have not been told as of yet their mission. The Earth has been under siege for thousands of years by darker forces which have infiltrated, almost all agencies, institutions and powers. You have been under a very suppressive Draconian or what some would call an Archon grid. This is coming to a close. The electromagnetic light spectrum on all levels has increased exponentially. The Central Sun connected to all other Suns has increased its flow of consciousness and energy. Consciousness, Light, Energy and Mass are all connected as frequencies of the same force. Due to free will and a lot of negative influence there has been a lot of miscreation outside of Universal Law. This solar system is in the boondocks on an outermost arm of the Milky Way. There are differences of opinion on whether we are even in the Milky Way none the less we have been left alone, some might say abandoned until the time is right.

NASA has released the charts on the increase of incoming energies, the Schuman Resonance is off the chart Tuesday it went from 7.8 to 74 which is one reason people are feeling out of sorts. This is all part of the awakening and healing or liberation of Earth. You can see it playing out on every level. The increase in social, economic, political, changes, severe weather, increase in earthquake and volcanic activity all are byproducts of these incoming energies. People are choosing between the upward spiral engaging their own higher consciousness and energy making their own personal God/Creator/Great Spirit connection, or the downward spiral leading to social, economic and environmental collapse. The days of tyranny are coming to a close, yet this will happen in stages. We are here for soul evolution, to gain the wisdom through experience learning from the past. This is where the wisdom from the Elders come in. There are Elders from Earth and Elders from the stars. The Elders of the Earth if awake are connected to the Elders in the stars. Your ancient ancestors are returning. They know the real history of Earth, the origin of your religions, and have a more expanded version of God far beyond the bearded images of the past.

What does this mean for Humanity? We are being given a golden opportunity to release the past, gain the wisdom from the experience and take a quantum leap in evolution. We can choose to join the rest of the Universe in Peace, reunite with the greater family of man, clean up the environment, put an end to most diseases and live a thoroughly loving, joyous abundant life. It is our birthright. We did not get into the mess we are in without interference. When I say interference, it exists on many levels, physical and non-physical. There in so much inhumanity on Earth because of non-human interference. This is being removed.

“For we wrestle not against flesh and blood, but against principalities, against powers, against the rulers of the darkness of this world.”

Many humans have chosen to serve these non-human entities due to promises of power, fame, wealth etc. These are false promises and never end well. This is a disservice to God and country.

The real power is love and it comes from making your own personal connection with God/Creator/Great Spirit. Real everlasting fame comes from service to humanity, saints, sages and masters are the most remembered. The real wealth comes from within, wealth of knowledge, wealth of love, wealth of joy, a life of service to humanity and the Earth feeling good about oneself that is the real wealth, it is nonmaterial. The transitory and false fame, wealth, and power sold to you by social consciousness is a lie. When you awaken many will realize almost everything they have been taught and told were lies. The social engineering, conditioning and programming has all been a plan carried out by these negative forces seen and unseen that have enslaved humanity for eons. Again, these forces are replete throughout the agencies and institutions you have in error given your power too. Some refer to these energies as the deep state or swamp. It is global.

When you climb the ladder of fame. power and wealth in most institutions of this day and age it gets darker and more decadent. When your eyes are fully opened the truth can be devastating. The masks are all coming down, the truth is being revealed and the true character of everyone will be made known. Politics, Hollywood, and the major religions are a good example. Nothing is how it seems and nothing is real concerning what the lame stream media tells you.  In fact, if you reverse what they are saying the percentage of truth would be much higher. The Great Awakening is here. How we deal with it and how much we resist it will be up to each individual. I would strongly suggest choosing Universal Peace, Brother/Sisterly Love, Individual Freedom and Prosperity for All, “Universal Law” the upward spiral of evolution.  It is time to listen to the Elders of Earth and the Stars. There are spiritually and technologically advanced civilizations which have conquered, poverty, disease, and live in harmony with each other and their environments. One would think it wise to follow their lead.